Welcome to day 8 of 31 Days of Heterotopias: Motels and Hotels, a month of posts about how motels, hotels, and inns function as heterotopias and liminal spaces in society.  Each post will look at these ideas from its own vantage point, which may not obviously connect with the others, and which may mention motels and hotels only peripherally or may focus on them without referencing heterotopia or liminality. I won’t attempt to tie the posts together. They’ll all be listed here, as they are posted.
________________________________________________

Then there’s sex. Usually better in a motel or hotel than at home, but why? Boundary blurring of private-public? Some kind of taboo related to adultery (commonly practiced in motel rooms exactly because they’re not quite private or public), a trespass (temporary usage of a space that’s not mine), that sense of anonymity or of feeling I’m not quite the me I usually am (or that you are not quite your ordinary you) — are we idealised and idealising, or is it just that the thought of a stranger is more exciting than the familiarity of each other? Is it that it’s a break in the routine, whether a different time, the different place, different bed, or some other aspect? A reminder of brothels and motels that can be rented for an hour, even if you’re there for three days on a straightforward business trip or for a funeral?

“… the North American roadside, a place underwritten by the values and desires of a cultural system that anxiously balances the competing aims of instant gratification and moral purity.” (on “Dreamland Motels” and Freud, at Motel Register)

Elizabeth Hornbeck, in her essay on Stephen King’s Overlook Hotel in his novel The Shining (in Stephen King and Philosophy, Jacob Held, 2016), is articulate in her description of hotels as places, heterotopias, where non-normative and transgressive acts can occur, activity that subverts normal social roles and rules. She notes first that Michel Foucault “describes motel rooms as heterotopias ‘where illicit sex is totally protected and totally concealed at one and the same time, set apart and yet not under an open sky.'”

“While Foucault does not mention hotels in his essay [“The Order of Things,” in which he does mention brothels], they satisfy his description of the heterotopia of deviance because of the unique kind of social space they offer. Hotels bring together individuals whose paths might not normally cross, and they create relationships and social hierarchies new to those individuals — relationships and hierarchies that do not always correspond to the individuals’ ‘normal’ relationships outside the hotel. In subverting the status quo, they are fundamentally political spaces in the broadest sense. …

“The family home … constrains the parent-child relationship, the spousal relationship, intergenerational relationships, and so forth, all according to socially defined roles. Breaking away from those norms is facilitated by leaving the normative space of ‘home’ and entering the subversive space of heterotopia. …. Heterotopias undermine our sense of ordering, defining, and understanding, and hence to some extent controlling, the spaces we occupy.  Unlike their counterparts, normative spaces, heterotopias are spaces where the transgressive can take place without censure.”

“Magic fingers” were all the rage at the classy places we went to as kids on family trips. 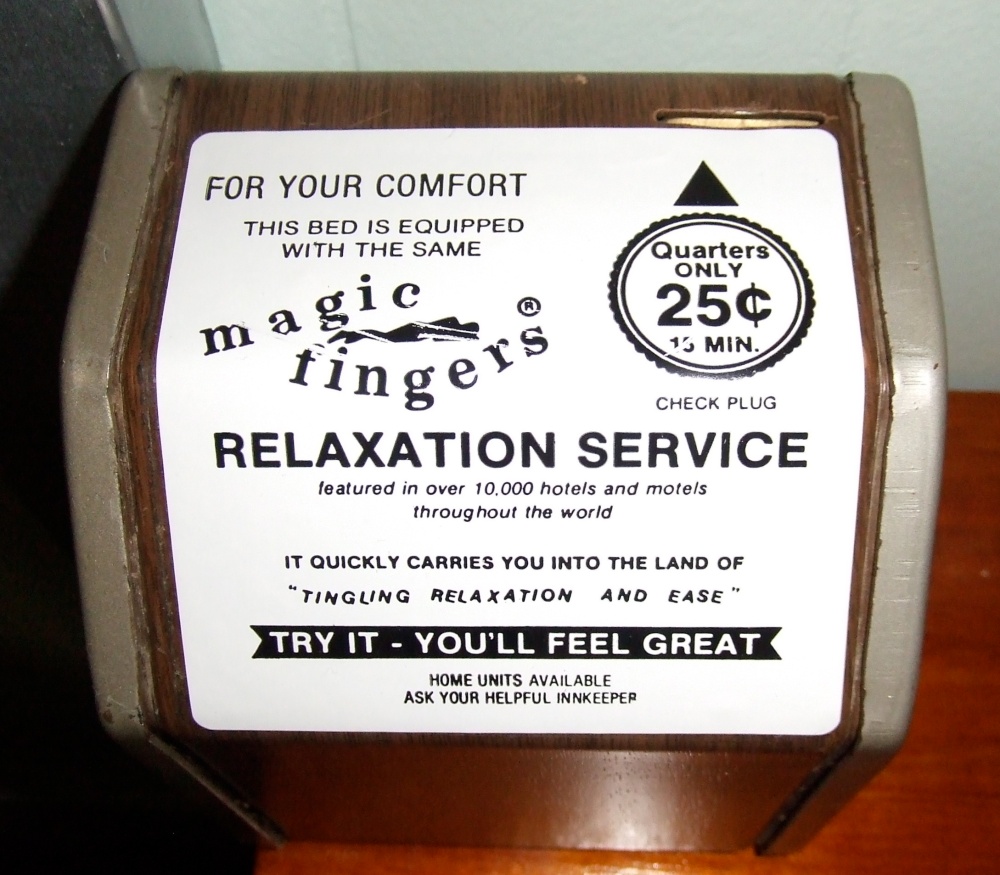 My sisters and I always put quarters in the slot and enjoyed the good vibrations. I shudder when I think about what was probably on the sheets and comforters. (The Flamingo Motel in Coeur d’Alene, Idaho had some of the last working units in 2012, still only 25 cents a go.)

I’m pretty sure I also know what’s floating around in the “jacuzzi built for two” and it’s not any kind of aphrodisiac. (This International Inn & Suites is in Hyannis, Cape Cod, MA. Their URL is “cuddles.com”)

Antony at Coming to the Quiet asked for volunteers to take a letter of the alphabet and name ten things we love that begin with that letter. He assigned me the letter F. (Here are links to other people’s letters and loves.)

Obviously, Fruitcake. I ordered my third one of the season from Gethsemani tonight.

“Fantasia.” Not the whole movie, really, but the scene with the dainty, pirouetting ballerina hippo (Hyacinth) in a tutu, and then the attendant ostriches, elephants, and alligators, set to Amilcare Ponchielli’s “Dance of the Hours” (audio clip here), is one of the best things I’ve ever seen. James Alison describes it well in the first paragraphs of his essay, “Blindsided by God: Reconciliation from the Underside.”

Fungi, photos of (and not as foodstuffs). So many textures, sizes, colours, shapes, groupings. Some are moist miniature umbrellas, others are perfectly formed Titleists, still others are hideous skin tumours, stacks of pancakes, fleshy moths. Boggles the mind. And they hold still while you take their pictures. (Some of my fungi photos here.) Along similar lines: filipendula, fennel, ferns, foamflower, fescue, fritillaria, fingerleaf Rodgersia, flax, and other fluffy, airy, grassy, variegated, and/or unusual plants.

Festivus (for the rest of us). Made famous in 1997 by its celebration in a Seinfeld episode. Mostly, I love saying “Festivus for the restivus” over and over, but my cynical soul also likes the way the festivities mirror what actually happens in many households throughout the land (the world?) at this holy time celebrating deep and transcendent peace. Which isn’t surprising since the holiday’s originator (the father of a future Seinfeld writer) says that “the only tradition that was made up by the [Seinfeld] show’s writers was the decorated Festivus pole — everything else was taken directly from his family celebrations.”  It’s celebrated on 23 Dec. (or any other day in December), with a simple aluminum pole instead of a Christmas tree, an “‘Airing of Grievances’ in which each person tells each and everyone else all the ways they’ve disappointed him/her over the past year, and after a Festivus dinner, the ‘Feats of Strength’ are performed. Traditionally, Festivus is not over until the head of the household is wrestled to the floor and pinned.”  (“I find tinsel distracting.” “I got a lot of problems with you people …”  “Stop crying and fight your father.”)

Fraud, David Rakoff’s witty, insightful, bittersweet collection of essays. I wrote this about it in a previous post: I recommend Fraud to anyone who likes David Sedaris (I think Rakoff’s writing is better but Sedaris is howlingly funnier), Sarah Vowell, and the PRI series “This American Life” in general. Some of the essays on the CD are about attending a self-help retreat at Omega hosted by movie star Steven Seagal, tracking down sperm he’d had harvested before chemo for the Hodgkin’s disease he contracted at age 22, a Japan travelogue, attending a Tom Brown Jr.  tracking course, the life of a low-paid NYC editorial assistant, looking for the Loch Ness monster, climbing Mt. Monadnock in NH in plastic Payless boots, etc.  He begins the book by saying that “the central drama of my life is about being a fraud, alas. That’s a complete lie, really; the central drama of my life is actually about being lonely, and staying thin, but fraudulence gets a fair amount of play.”

French literary critic and anthropologist Rene Girard, and the girardians who have followed, most notably for me, James Alison (who is a priest, so therefore Fr. James Alison, another F word).  I have already said a lot about their work on this weblog.

“Foul Play,” the 1978 comedy/thriller starring Goldie Hawn and Chevy Chase, with a nice role (presaging Austin Powers?) for Dudley Moore, too. It’s written and directed by Colin Higgins, who also wrote the screenplay for “Harold and Maude” (1971), and, as Wikipedia notes, it makes mild use of some Hitchcockian devices. Goldie Hawn is one of the few celebrities I would say I’m a fan of, and she’s super-cute in this movie. The best part, though, is that an albino, a dwarf (one dwarf — not the other one, who prefers the term “little people”), a Turk, and a Catholic Bishop are all trying to kill a librarian. Add in a door-to-door Bible salesman, a risque Scrabble game, a cop offering pot to the public, protracted chase scene through San Fran, The Mikado and a toe-tapping Pope, knitting needles as weapons, a man with a scarface, mildly kinky sex paraphernalia, a Turkish bathhouse, disco, senior citizens trained in martial arts and eagerly locked in mortal combat, and you get some idea of how over-the-top it all is. (“Beware of the midgets. They’re taking over the world.” “Monica drowned this morning.”)

Fur-Bearing Beasts. Mostly dogs, and also cats, wolves, panthers, jaguars, kangaroos, seals, tigers, sheep, bears, gerbils, rabbits, squirrels, chipmunks, and animals with more hair than fur, such as elephants, rhinos, hippos, pigs, porcupines, deer, etc.  I’m not crazy about monkeys. My first word was “dog,” my mother dreamed about having puppies when she was pregnant with me, and I have been in love with dogs in the aggregate and in particular since as long as I can remember. The dog who lives with us is lying two feet from me as I type. She hates most of the other fur-bearing beasts I mentioned, at least those she knows about.

Forgiveness. Thank God for it. Not an offer of forgiveness that is really a way of accusing or retaliating on the part of someone who feels s/he is a victim, a sort of claiming of higher moral ground on the part of the forgiver, but the forgiveness offered by someone who recognises that s/he is forgiven, accepted, loved, liked, and who from within that awareness and experience of being forgiven joyfully forgives.